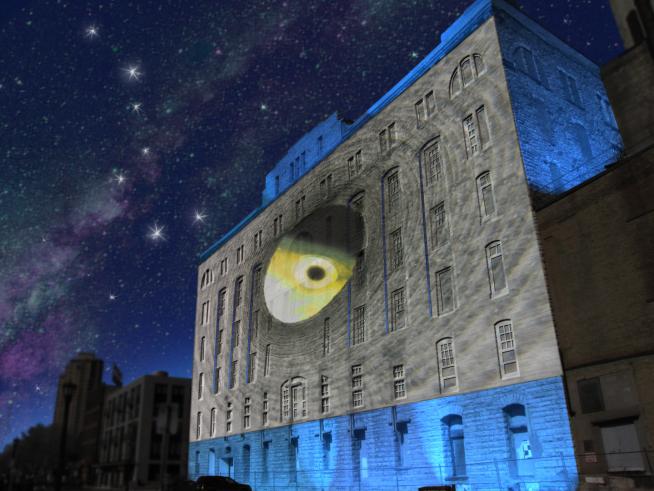 “Under Ice” by Michael Murnane

Using high-resolution projections, live multi-layer playback technology, and stage lighting, Murnane will project massive images on the wall in the Hansen Arts Park. These images were collected through the ice and reveal his reflections and feelings from years of ice fishing with his father, as he wondered what was going on through the hole as well as in his own life.

Lighting and projection artist Michael Murnane attempts a rare and sometimes frightening glimpse into the living world under ice. After ice has formed on the surface of a lake or river, it becomes an eerie ghostly environment of darkness, with fleeting images of life, and of silence, broken only with an occasional thundering crack.

Minneapolis lighting designer Michael Murnane loves to point lights and projectors at just about anything in an effort to create a unique environment. A thirty-year veteran of theatrical lighting design, he has lit hundreds of shows in the United States, Canada, China, Tanzania, Kenya, and several countries in Europe. He works in a wide range of theatrical genres, including theater, opera, concerts, galas, architecture, television, and corporate events, and his designs consistently win praise for their powerful emotional tone.

“Under Ice” will be on display along with story telling by Kevin Kling during the Downtown ArtSpark Festival August 25 – 26th in the Hansen Arts Park (on the corner of 1 avenue & 2nd street downtown Jamestown) from 9:00 – 10:00 pm.

In conjunction with the “Under Ice” projections: Storytelling with author, playwright, and teller of tales Kevin Kling who is best known for his popular commentaries on National Public Radio’s All Things Considered and his storytelling stage shows like Tales from the Charred Underbelly of the Yule Log. Kling delivers hilarious, often tender stories. His autobiographical tales are as enchanting as they are true to life: hopping freight trains, getting hit by lightning, and eating things before knowing what they are.